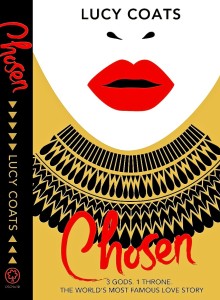 “I didn’t expect to see an LGBT theme in a book like this (I don’t know why…), but it was really refreshing and felt natural. This is a great sequel to CLEO. Maia and a Little Moore blog read full review

“What this book does, apart from entertain and thrill, is teach you about Egypt and Rome. No amount of reading history books…can make up for what’s in Lucy’s two novels about Cleo. It might not all be true (after all, how could anyone know for certain?), but it sets the scene so well, and learning through fiction for fun means you want to know, and you want to remember it. For yourself, and not for an exam.” Bookwitch blog read full review

“This fast-paced adventure story will give teen girls a really excellent alternative to stories set in the modern and future worlds and they will find it just as engaging, as the young Cleo is a feisty, highly educated and exciting character – as you’d expect!” Parents in Touch magazine

Tryphena is dead, evil Berenice and her dark demon god hold the Pharaoh’s throne – so Cleo must flee the city of her birth and seek out her patron goddesses before it’s too late to save Egypt. Not only must she make her way across the desert to restore Isis’s power, but her goddess also commands her to raise two armies before taking ship across the Great Green Sea to find her exiled father in Rome. The weight of royalty hangs increasingly heavy on Cleo’s shoulders – and impossible, scary decisions lie ahead.

What should she do about her unpredictable and moody scribe-spy lover, Khai? Will best friend Charm desert her for the mysterious soldier-girl, Iras? And what about the troublingly handsome young soldier Cleo meets on the way to retrieve her exiled father? Is Marcus Antonius the prophesied one who will ultimately be the death of her? Most important of all though, can Cleo and her untried troops pass the Egyptian gods’ final test? Can they find a way to defeat the unnatural army of the Burnt-souled Dead stalking the streets of Alexandria? Or will all of Egypt run with the blood of unhallowed and infernal sacrifice?

This captivating novel of love, power, magic and destiny in Ancient Egypt continues the untold story of the young Cleopatra on her path to becoming the greatest Pharaoh of all time, which began with CLEO.

Out now from Orchard Books