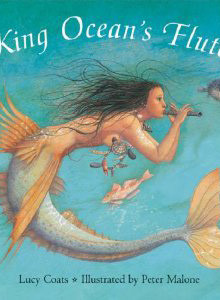 Paulo the shepherd boy drives his family mad with his humming, so his grandfather gives him an old flute to distract him. But oh dear! His playing is really terrible and all his sheep run away. Luckily, Paulo is helped out by all the animals, birds and insects in the meadows he loves, and soon he is so confident that he challenges King Ocean himself to a contest. King Ocean is furious and summons Paulo down into his watery kingdom. If Paulo fails to play the king’s own flute, he will have to scrub the salt off the seabed for seven whole years. Can he do it, or will the mermaids have a new scale polisher?

Wonderful, glowing pictures by Peter Malone make my words really come to life—and see if you can find the name board of the Titanic!

A long time ago, I wrote a story called The Lady of Earth and the King of the Sea. It was really long, and I didn’t know what to do with it. Then my editor said that Peter needed a picture book. I looked in my ideas box, and saw that my old story was really a picture book text in hiding. I cut and rewrote and turned it all around, and ended up with King Ocean’s Flute. It goes to show that you should never throw idea stuff away—you just might find another use for it.

It was a perfect story for Peter to illustrate, because his artwork is full of jewel-like colours, rather like the illuminated manuscripts of medieval times. I wanted the pictures to have a rather renaissance, Italian feel to them, and Peter has done a fantastic job of bringing what I had visualised to life. There’s so much to discover on each page, and I love all the witty little touches like the pot of Scaloglit for polishing the mermaids.

“The loveliest summer book of all is King Ocean’s Flute…ideal for the seaside.” Amanda Craig The Times

“Evoking in loving detail an Italian village on the Mediterranean sometime early last century, this picturebook tells the story of a shepherd boy whose flute-playing is inspired by the sounds he hears: larksong, the whirring of dragonfly wings, the clopping of lambs’ hooves. He comes to the attention of King Ocean, whose own flute is unrivalled for conjuring the watery noises of the deep, and who summons him to an underwater contest. The pictures owe something to Italian Renaissance painting, with solid Giotto-esque peasant figures and distant perspectives on the Italian landscape. The carvings around the church door, the colours of a goldfinch, rays, eels, puffer fish and lobsters are all rendered with scrupulous accuracy, while blues and terracottas suggest the southern light. Only the fierce-looking, grey-skinned King Ocean strikes a chill, sitting on a driftwood throne, with webbed feet, pointed ears and wearing a drowned sailor’s ragged uniform. Witty details (mermaids have seals and turtles on leads for pets, and their scale polish is called Scaloglit) add a note of surreality to this skilful, minutely observed decorative masterpiece.” The Sunday Times Children’s Book of the Week

“A magical picture books with a truly classic feel and enchanting evocative flavour.” The Glasgow Herald

“Lucy Coats spins a tale that feels like something handed down through generations of storytellers. In a noisy, post-industrial society, this story teaches readers to tune their ears to the quieter sounds of nature. This reader was reminded of a scene from the Italian film ‘Il Postino’, when the postman, a fisherman’s son, makes a cassette tape for his beloved poet, Pablo Naruda, with his collection of sounds from the island.

Illustrations by Peter Malone quietly enhance this story with a soft, sun-bleached atmosphere. The pictures, heavily influenced by Italian renaissance paintings, have a simple, quiet feel to them, with the occasional trace of humour, such as the scene where Paulo is holding a pot of Scalo-glit and polishing a mermaid’s rump. “ WriteAway January 2008

“A beautifully illustrated, lyrical story of the natural world, with intriguing details for readers to discover.” Child and Junior Education Best Books of 2007

“This beautiful story, simply constructed and told, is illustrated in soft, muted tones, both on land and below the sea. The mermaids surrounding the King softly glisten, as they listen acutely to the music of the King and Paulo. The sea creatures are finesly and accurately drawn, as are the land creatures at the beginning of the tale. What a wonderful emperor dragonfly, almost life-size! The villagers are portrayed with depth of character and a quality of timelessness, along with pony and cart, fishing tackle and the palpable heat of a Mediterranean port. An entrancing book.” Books for Keeps November 2007 5*

Of all the books I’ve ever written, this is the one I most regret being out-of-print. It can still be found in secondhand bookstores and online at AbeBooks if you’d like to read a copy.