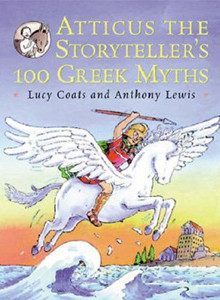 Atticus the Storyteller leaves his home in Crete and sets out on an epic journey round Greece with Melissa, his faithful donkey. His destination is the competition that takes place at the great Storytelling Festival at Troy. On the way he visits all the places where the stories actually happened, and tells the tales to all the people he meets. He survives shipwreck, storms, savage dogs and all manner of obstacles before he arrives at Troy. Does he win the competition? You’ll have to get the book to find out! Meanwhile, on this page you can read a little bit about the competition, dip into one of my favourite stories, and listen to some audio clips.  You can also watch a short video of Atticus’s journey!

The Greek myths have been a part of my life for as long as I can remember, so when I was asked to write this book (now the biggest collection on the market for children), it was a dream come true. The publisher wanted something a bit different, so I thought and thought, and suddenly Atticus and Melissa popped into my head. I’d always been fascinated by the fact that the myths and the landscape of Greece are inextricably mixed up, and when I started to do some research, I found out that all the myths are linked to real places which you can visit to this day. That’s when Atticus and Melissa told me they wanted to go on a journey. I had huge fun (and some huge headaches) planning the whole thing, and spent a lot of time with my walls covered in big maps stuck with different coloured pins, working it all out. You will see that the book is dedicated to my two headmistresses, June Vallance and Ruth Rudge, two strong, wonderful women, who were instrumental in lighting a real fiery love for classics in my heart. When I sent a copy to Ruth, this is what she wrote and sent out to lots of people. I was hugely touched and it meant a great deal to me. It’s probably the best ‘school report’ I’ve ever had:

“Lucy’s retelling of 100 Greek myths is a tour de force. She has woven the stories into an amazingly coherent tapestry, by the simple device of a storyteller travelling with his donkey through Greece, thus enabling her to describe not only the setting, but also local customs connected with the myths. It is written beautifully, in modern style, and copiously, amusingly and accurately illustrated by Anthony Lewis. Despite a lifetime’s familiarity with these myths, I have re-read them, in Lucy’s version, with the greatest pleasure. It would seem to me to be a perfect introduction to this wonderland of literature as well as a delightful way of re-calling and viewing afresh what one has long loved. I thoroughly recommend it to you all.”

All of these CDs can also be found in downloadable format on the Orion website. You can listen to some extracts from the audio books here:

Tantalus and the Terrible Feast

In this extract from Atticus the Storyteller’s 100 Greek Myths, you can learn about how much the Greek gods and goddesses loved storytelling—and meet Atticus and his family for the first time. Doesn’t he have a lot of children?

Stories from the Heavens

Long, long ago, in Ancient Greece, lived gods and goddesses, heroes and heroines, together with fearful monsters and every kind of fabulous beast that ever flew,or walked or swam. But gradually, as men began to build more villages and towns and cities, the gods and monsters disappeared into the secret places of the world and the heavens, so that they could have some peace. And although there were still heroes and heroines around (and always will be), they were less famous, and less strong with every century that passed. Before they disappeared, the gods and goddesses gave the great gift of storytelling to men, so that their tales would never be forgotten. They ordered that there should be a great storytelling festival once every seven years on the slopes of Mount Ida, near Troy, and that tellers of tales should come from all over Greece, and from lands near and far to take part. Every seven years a beautiful painted vase, filled to the brim with gold appeared as a first prize, and the winner was honoured for the rest of his life by all the people of Greece. Now, in a little village called Cydonia, near the other Mount Ida in Crete, lived Atticus the sandal maker, with his wife, Hera, his nine children (eight girls and a boy), Io, Eos, Geryon, Delphi, Dione, Pirene, Iambe, Thallo and Trivia, Melissa his donkey, Circe, his pig, Scylla, his cow, Phaeton, his cockerel, and twenty-four hens who had no names, because they were always getting eaten by the fox…

The Queen Who Cried Rivers

If you look on the video of Atticus’s interactive map of Greece, you can see an actual photograph of the stone Niobe on Mount Sipylus in Turkey! Isn’t it amazing that it’s a real place? This is Niobe’s story.

Queen Niobe of Thebes looked at her seven handsome twin sons and her seven beautiful twin daughters playing in the palace courtyard. “Surely they are the most wonderful children in the world, and I am the cleverest mother in the universe to have had them all,” she boasted to her husband Amphion. “I’m better than a goddess at being a mother anyday—after all look at silly little Leto. She may have had one set of twins, but I’ve had seven! I think I should be a goddess too.” And she ordered the people of Thebes to set up statues of her in the temples and worship her. Now gods and goddesses have a nasty way of hearing when humans boast, and sure enough, a little swallow flew up to Olympus and told Leto what Niobe had said and done. Leto called her children Apollo and Artemis to her at once. “Let us teach this woman a lesson,” she said. “Let her daughters be frozen to death by icy moonbeams, and let her sons be roasted by the rays of the sun.” The next morning, when Niobe went to wake her children, all she found in their beds were seven little blocks of ice, and seven little heaps of charcoal. Niobe started to weep. She wept so loud and so long that all the people of Thebes covered their ears to shut out the sound. She wept for seven long years, until the palace was swimming with salt and sadness. Zeus himself heard her cries, and he took her away and turned her into a statue, and set her on the slopes of Mount Siphylus where her father Tantalus lived. But even as a statue Niobe still wept, and the tears of her grief have fallen down the cliffs of the mountain in a great bubbling stream from that day to this.

“Storytelling…at its most compelling.” Junior Education, Book of the Month and 100 Best Books of 2002

“Very accessible for young readers. The writing is perfect for reading aloud. An ideal source book (and) a useful map shows the location of each myth.” Child Education

“A splendid reminder of the wonder of the oldest of stories. This large, fat volume… should be in every home and classroom. The language is sure and lyrical and the tales read aloud well. A perfect gift.” Wendy Cooling The Bookseller

“A bumper bargain crammed with stories, with a freshness and vigour to make it a welcome addition to any child’s bookshelf.” Bookseller Buyer’s Guide

“Worth every penny.” Independent on Sunday

“For those who love big books brimming with stories. Lucy Coats’s lively retellings never undermine the significance of these tales while Anthony Lewis’s delightful illustrations will hold the attention of those not yet able to tackle the book on their own. This is an old-fashioned book in the best sense—beautifully designed and produced with a solidity which suggests it will not be jettisoned easily.” Lindsey Fraser Glasgow Sunday Herald

“A real winner. For a long time there has been a real lack of a superb retelling of the Greek Myths for younger children. This version will be with us for a long time, it is to be hoped, as it is vibrant, immediate and above, all fun! Provides that wealth of small detail which children find so fascinating. A really lovely book for all the family to share.” Books for Keeps

“A brilliant, accessible introduction to the Greek myths.” The Good Book Guide

“An ideal way to attract new readers to this fascinating world.” The Spectator

“Among the many retellings of the Greek Myths, this new edition stands out for the accessibility and liveliness of Coats’s storytelling…” Financial Times

“A lovely book for children…great value and beautifully illustrated.” Eastern Daily Press “Concisely told in simple language, this is a good way for kids…to discover these stories.” Sainsbury’s Magazine

“Lucy Coats has produced the perfect book to introduce children to the Classical world. The legends are told in straightforward language and there’s also a map which shows what happens where. If you believe that children still need a reasonable grounding in the Classical world to understand outs, this provides a first-class way of achieving it. And children love it: the review copy was grabbed by my eight-year-old who was still reading it (under the covers) an hour after lights out.” The Field

“An ideal way for young readers to enjoy the enchantment and wonder of these timeless tales and to discover that, yes, there really was a world of magic long before Harry Potter.” Waterstone’s Magazine

“The text is expertly paced to hold the attention of younger readers. A big hit with my young tester.” Book Fest

“As soon as I picked up this book I was drawn into the wonderful world of myths and legends. All the old favourites…beautifully illustrated.” Lincolnshire Echo

“This really is a lovely children’s book and a fantastic way to introduce them to Greek mythology. Both easy to read and exciting.” Norwich Evening News

“The brevity of these retellings makes these a must-have resource for anyone teaching myths or Ancient Greece. The stories are well chosen and…well organised. The usual crowd are here—Prometheus, Pandora, the Gorgon and the Minotaur—but presented in a way that makes them more accessible…than more drawn-out retellings. Reminds us not to isolate these great myths in the class ‘doing the Greeks’ but to let loose their primeval chaos throughout the school.” Huw Thomas, Times Educational Supplement

“The print version of this charming anthology of stories about the titans and their spectacularly heroic, wayward, lascivious, boorish and occasionally kindly offspring, aimed at four- to eight-year-olds, has pictures. The audio is better; it has Simon Russell Beale. Actors reading to small children invariably adopt a cringe-making, “isn’t this fun?”, wide-eyed-wonder tone. Not Russell Beale. His quiet, serious reading makes the OTT exploits of Zeus, Perseus, Theseus et al and the plethora of monsters, gorgons, cyclops, etc totally credible. As myths should be.” Sue Arnold  The Guardian Nov 3rd 2007

“Atticus the sandalmaker, with his donkey Melissa, sets out from Crete on a journey to a storytelling festival near Troy. On the way, he unpacks 26 Greek myths, perfectly pitched in language that is neither too antiquated nor too self-consciously slangy. For imprinting on five to 10-year-old minds the fates of famous names such as the Minotaur and Midas, this audiobook cannot be bettered: Simon Russell Beale’s gentle and musical voice enchants, then startles as he erupts into the rough-hewn shouts of sailors, the cackles of the Gorgons, and the bellow of Zeus.” Carol Mansour The Daily Telegraph