Coll the Storyteller’s Tales of Enchantment 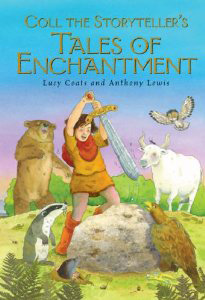 Save now the Treasures all hidden.
Warriors fight in lands forbidden
and fire and danger ring the Merlin’s nest.

Before next Wintereve has gone
Coll Hazel must find Avalon
And bring the Treasures to a safer rest.

Coll the young bard has a vision of danger and a mysterious high green hill. So on the morning after Wintereve he and his cheeky raven, Branwen, sail away from his home far in the north of Alba (that’s Scotland now) on a quest to find the hill and rescue the thirteen Treasures of Britain. Who will help him? Will the gods be on his side? And how will he escape the fierce raiders sailing to attack the Island of Britain?

All is eventually revealed as Coll finds his way through the lands of Ellan Vannin, Eriu, Cymru, Armorica, Kernow and Dunein, not to mention the confusing mists of the Otherworld, telling fifty wonderful Celtic myths and playing his harp as he goes. And of course he has Branwen to keep him cheerful (and peck him when he’s not).

This book is in a similar format to Atticus the Storyteller’s 100 Greek Myths, so you can follow the separate story of Coll’s magical journey in words and Anthony Lewis’s great cartoons as you go through the book as well as having fun finding the real places he visits on a map of the British Isles. You can read an extract below. Sadly, this book is now out-of-print, but you can still find secondhand copies at online bookstores such as AbeBooks.

I am a Celt by blood, and the stories of Finn and Cuchulain and all the heroes of this land are part of my heritage. I had a wonderful time wandering around all the parts of Britain (and I went to Brittany too), talking to all sorts of interesting people and finding sniffs and fragments of fabulous stories in all kinds of dusty old guidebooks and histories. A good few of these stories (especially the ones from Skye) have never been written down for children before—in fact the last time anyone heard them properly was probably orally, from a grandma or grandpa, and that would have been local to where they first came from. 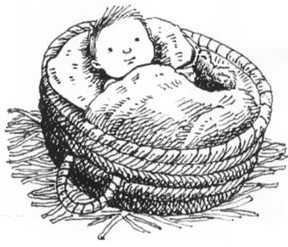 The map was just as much fun to do as the one for Atticus. I walked miles over Dartmoor to find Wistman’s Wood where I have sent Coll to find Merlin. It’s a really enchanted place with twisty trees all covered in moss, and great grey-green boulders scattered like a giant’s jackstones. Merlin wasn’t there when I visited, but perhaps he was just too well hidden for me to find. As for the Thirteen Treasures (or Hallows) of Britain—the easiest place to find a list of them is at wikipedia.

All the places on the map have either a connection to the story, or there is evidence that a settlement would have existed there in the time of the druids. The best thing for me has been bringing all those ancient sites back to life.

This is an extract from the beginning of Coll the Storyteller’s Book of Enchantments. Just imagine Branwen as a baby chick. Bet she was cheeky even then!

Long past long ago, behind the shadow mists of a thousand tales, the Islands of Britain floated on the edge of the world. They were lands of green hills and roaring seas, of soft sunshine and slanting grey rain, filled with magical oak groves and mysterious tall stones; where giants walked and fairies danced and seal-people sang amongst the waves. In those days enchantments lay in every clod of earth and grain of sand, and spirits of wind and water could be heard whispering in the sound of every breeze and ripple of every stream.

And in a certain hollow green hill, guarded by Merlin’s spells, the Thirteen Treasures of Britain lay hidden . . .

The centuries rolled by, and invaders came from oversea. Cruel wars were fought, cutting through the threads that held the enchanted cloth of the lands together. Little by little even the strongest magic weakened and was driven underground. Only the druids and the bards remembered, passing on the secret knowledge and teaching the old stories in schools hidden in faraway places where no one would find them unless they were meant to.

And in a certain year, at the time when the sun was hot in the sky and the hazel nuts were ripening on the bushes, a baby boy named Coll and a raven chick called Branwen were blown by the winds to the island school at Callanish in Alba (which in these days we call Scotland). There they stayed for thirteen years….

The Story of Yann-An-Odd, Lord of the Dunes

When Coll sails over to Armorica (which we now call Brittany), in France, this is one of the magical people he meets there. Spooooky!

“Hush,” say the fishermen in their boats at dusk, “hurry!” And they sail swift and sure for the safety of the harbour and home. For far out in the dark and the drift of the waves comes a howling cry.

“I-ooou! I-ooou! I-ooou!” it goes, eerie and shrill as a seagull, a lonely, lost sound. And sometimes a sailor will sigh and stare, and turn his tiller for the open ocean, hearing words which draw him on, on, to the wrecking rocks and down into the deep. And there he will join Yann-an-Od, Lord of the Dunes, in his house made of bones and sea-wrack and shell, surrounded by whispering ghosts and mermaids, who feast on silver pilchards and rainbow mackerel stolen from the nets above.

But at other times a sailor far out on the waves, lost and helpless in a storm, will hear in that cry a sound of hope and comfort, and he will see a green glow ahead. And an old man, sometimes giant, sometimes dwarf, but always dressed in black, will row in front of him and guide him safe to shore by the light of his shadowy lantern.

It all depends, say the fishermen, on whether the Lord of the Dunes is in a good mood or not.

“Those who want unadulterated Celtic stuff should get Coll the Storyteller’s Tales of Enchantment. These—some well known, others not—are among the best we have, and, in Coats’s clear prose, ideal for bedtime reading and/or holidays in Britain.”  Amanda Craig, The Times

“A real pleasure to read and to dip into for a long time…I was glad to see a raven featuring so prominently.” Philip Pullman

“What an accessible introduction to Celtic mythology! Coll the Storyteller is a young bard on a quest. He must rescue thirteen sacred treasures and discover the resting place of King Arthur. On his journey, he and his companion, the raven Branwen, tell each other stories. And it is these which are the real treasures of this book. There are tales here from the Mabinogion, Irish myths, Arthurian legends, as well as stories from Scotland, Cornwall, Brittany and the Isle of Man. Some are well known, others less so. All are told in direct and immediate prose, illuminated with flashes of brilliant imagery.

A few of the more brutal or tragic tales have been gently edited. Purists may object, but it ensures that no tale is unsuitable for young listeners. Lewis incorporates photographs of real stones, leaves and textiles to give his black and white cartoons an authentic, almost tactile, feel. Terrific.” Dawn Casey in Armadillo Issue 9.4 Winter 2007

“This seems an ideal book for The Corncrake and for Colonsay since the name Coll is itself such an important one in THIS island’s life and history. Many local people are related to Coll or even descended from Coll!! Not this actual bard of course but this young storyteller does travel right through the Western and more Celtic fringes of the British Isles.

Although there is a central theme to Coll’s travels each chapter is a stand-alone story – ideal for bedtime reading. Some of the names, and their spellings and pronunciation, may at first seem complicated to the younger reader [though there is a helpful guide provided] so probably this is best as something an adult would read aloud. Many of the myths and legends and their heroes will be familiar to them both from their own childhood but also from wider reading of Celtic literature later in life – Arthur, Finn MacCool, Cuchulain to name the most obvious. To me it seems significant that these tales are “peopled” with lots of animals both real, like cattle and ravens, and imaginary, like mermaids and kelpies, but almost always talking directly to the humans, fairies and wizards.The prose is clear and to the point and the black and white line drawings are scattered tantalisingly throughout the text. I have not actually found Colonsay but Islay, Skye and the Uists all have their own named sections and naturally the whirlpool [or the Gulf as local fishermen would call it] of Corryvreckan features too. All excellent stuff – and very good value!” Georgina Hobhouse in ‘The Corncrake’

This is a well-illustrated, attractive hardback containing tales from Celtic literature, including those of Wales, Ireland, Scotland, The Isle of Man, Brittany and Cornwall, told in traditional folk style. Some are written for children for the first time. Reading these stories is rather like listening to tracks on a Steeleye Span CD. The prose has an unearthly, long-ago magical quality – and a lot of Celtic names (but there is a pronunciation chart at the front)! Junior Education PLUS January 2008